Has responsibility for recommending appointment, training and co-ordinating AWO’s.

Has responsibility for overseeing animal welfare at rodeos. Appointed by the Board of Directors.

Arena
The fenced area in which the action takes place.

The adjudicator of the production and coordinator of the rodeo. Role includes organising the stock, contestants and proceedings according to the rules. Has the power to enforce the NZRCA Rule Book and Code of Welfare Rodeo.

An individual, partnership or such who supplies livestock for rodeo purposes and has proved to the NZRCA Board that their proceedings, activities and stock involved are satisfactory.

Automatic Timers
The timers that a barrel racer crosses to start timing her run, she then crosses the same timer again to complete the run.

Riding a horse using rigging and no saddle

A timed event in which an individual horse and rider complete a clover-leaf pattern around three barrels.

Belt Buckle
Each seasons-end champion is awarded a gold belt buckle signifying his/her achievement. Throughout the season, some other clubs will also award belt buckles to event winners.

Bit
The part of the bridle that fits in the horse's mouth.

Bridle
Fits over a horse's head with the purpose of holding the bit in place, used as a form of control.

A horse that is trained to buck in the rodeo arena.

Buck Rein
A rope attached to the horse's halter, which a saddle bronc rider holds onto during his ride.

Bucked Off
When a rough stock rider is thrown from the animal before he has completed the required 8 seconds. He is therefore disqualified and does not receive a score.

A male bovine of breeding age.

Persons in the ring during steer and bull riding events who are responsible for distracting stock away from the rider and/or freeing riders’ hand if caught up, after the rider dismounts.

Riding a bull or steer using a girth rope.

Bovine under one year of age.

Central Entry System
The on line system for taking rodeo entries. Certain days are set for each rodeo and contestants must enter during these times. If contestants miss these dates, they must then contact the national secretary direct. Visit the member info page during the season for Central Entry Dates.

Chaps
Traditionally pronounced "shaps". Generally made of leather and are used to protect the legs of a cowboy or cowgirl. They come in various shapes, colours and patterns.

Chute
A chute is a steal or wooden box from where a rough stock event starts. They are lined up lengthwise at one end of the arena. The number of chutes depends on the size of the arena & ranges from 4 to 10. The rider climbs onto his horse or bull in the chute, when he is ready for his ride he calls for the gate, the gateman then opens the chute gate and the ride begins.

The person in control of the chute area to organise the stock, contestants and proceedings according to the rules. Reports to the Arena Director. Can be at the timed event or rough stock ends.

Cinch
A strap(s) that run under the horses belly, holding the saddle in place.

Clover-Leaf Pattern
The pattern a barrel racer must run around 3 barrels in order to make a qualified run.
See Barrel Racing event description for more information.

Group of people responsible for running the rodeo, do not need to be financial members of the NZRCA.

Leader of the club/association organising the rodeo and responsible for running of the rodeo.

Administrator of the club organising the rodeo.

Dally
Wrapping the end of a rope around the horn of a saddle.

Draw
Contestants are randomly paired with the stock they will compete on. This is known as the draw. Draws are completed by Event Directors in conjunction with the rodeo secretary.

When the flag judge drops his/her flag to signify the end of the contest.

Flank Strap
A sheepskin covered strap that goes around the flank of the animal. There are two types of flank strap used in rodeo.

Flank Strap for Horses - The flank strap used with horses is a wide strap of leather covered in sheepskin for comfort and protection, loosely placed around the flank area of the horse in preparation for the horse leaving the chute. Adjusted so it cannot over tighten, as the horse leaves the chute the strap is pulled up to its adjusted setting. This creates a more uniform bucking action. The flank strap works on an ask and reward format similar to most training principles. When the horse kicks up behind the flank loosens. At the end of the ride, pickup riders release flank by pulling quick release catch and the flank falls to the ground. 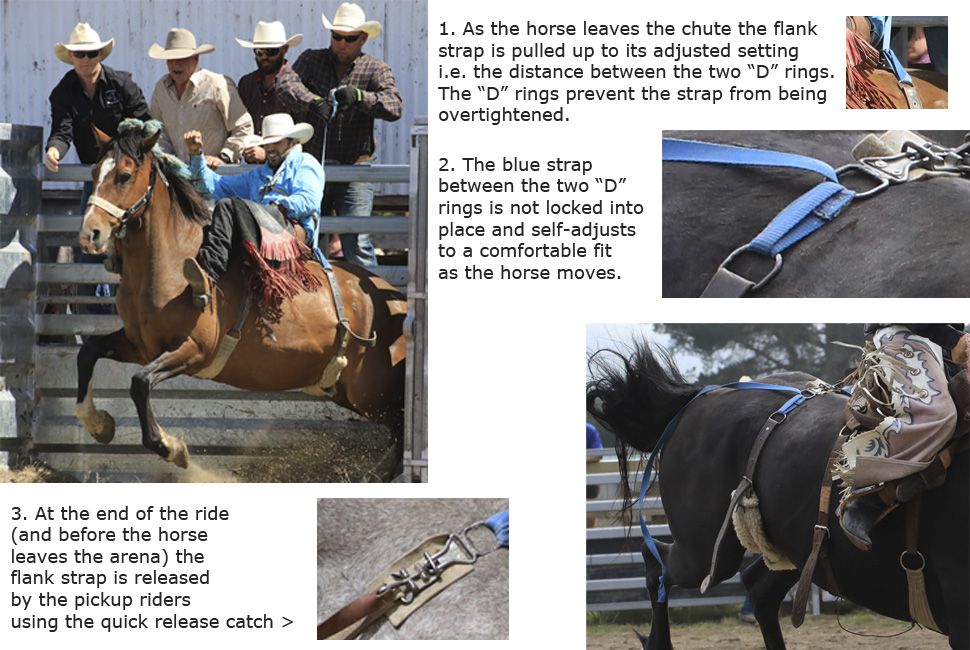 Bull Flank Strap - The flank strap for a bull is a simple sheepskin covered rope, which is tied snugly around the bull’s flank area using a simple quick-release knot prior to release from the chute.

Gate at opposite end of the arena from chutes where stock can leave once a run is complete.

Halter
Headgear that is used to control a horse. Fits over the back of the neck and around the nose of the horse, when the halter is pulled the horse turns towards the direction pulled.

Hazer
Assists in steer wrestling by riding alongside the steer, keeping it running straight.

Hooey
A half hitch around two of the animal's legs, used at the end of a Rope & Tie run.

Officiates in the arena at a rodeo to ensure that the current version of the rule book is adhered to by all present. Appointed by the Board of Directors.

Has responsibility for recommending appointment, training and co-ordinating Judge’s.

Junior
A Junior or Youth contestant is under 15 years of age as at May 1st.

For Children under 50kgs, (when fully dressed for competition including vest, helmet and boots), male & female, NZRCA cardholders & the public. Cardholder's points count towards the year-end trophy buckle. Stock to be a minimum weight of 200kg. (Previously known as Calf Ride)

Late Entry
When a contestant misses central entry days and must contact the specific rodeo's secretary to enter. It's up to the secretary of each rodeo to decide if they will accept late entries.

Losing Stirrup
When a saddle bronc rider's foot comes out of the stirrup during a ride.
He is therefore disqualified. Often called 'blowing an iron'

N
National Finals Rodeo (NFR)
Held at the end of the season each year. The top 8 contestants qualify from each open event. The Champions are crowned at the end of the finals, where saddles and buckles are awarded at a presentation dinner.

Appointed by the Board to undertake such duties as required to ensure the efficient and effective administrative running of the Association.

Appointed by the Board to undertake such duties as required to ensure the efficient and effective financial running of the Association.

No Time
When a timed event competitor fails to complete his or her run, for whatever reason.

Stock not regularly used in rodeo events and which are only used once at a particular rodeo.

For Youth under 15 years of age, male and female, NZRCA cardholders and the public. Riders must complete a 6 second ride to qualify. Cardholders points count towards the year-end trophy buckle.Minimum stock weight 275kg.(Previously known as Junior Steer Ride)

Committee formed under instruction from the Minister of Primary Industries in 2019. Involves participants from a number of sectors. Reports to NAWAC and the Minister.

There are usually two Patrons, one in each Island. The Patrons will confer credibility to the organisation and provide advice and guidance to the Board and members. These people use their skills and knowledge to assist and guide the NZRCA to ensure its aims and objectives are put first.

As defined in the Act ‘in relation to an animal, includes a person who has an animal in that person’s possession or custody, or under that person’s care, control or supervision’.

Mounted persons in the ring who are responsible for collecting riders from bucking horses and guiding animals out of the arena following rodeo events.

Pigging String
A short rope that a cowboy uses to tie the legs of the calf in a Rope & Tie run.

An individual, partnership or such who supplies livestock for rodeo purposes and is under supervision.

Pulling Leather
When a rider grabs onto the saddle when a horse bucks with his free hand.

Purse
The amount the rodeo club or event sponsor puts up as prize money for each event. Contestants entry fees are then added to make up total winnings.

Rank
Stock that are known to be tough to ride.

Re-ride
Judges can award a re-ride to a contestant when the animal fails to buck to their satisfaction, falls or fouls the rider.

Any public event which involves any of the following:

Or any event which calls itself a rodeo.

The official of the organising association, and who is responsible for the running of the rodeo.

An officially organised event for the purpose of instructing students in the correct techniques of various rodeo disciplines, training of time event horses and for teaching trainee judges.

Any situation where people and/or animals are trained to participate in rodeos.

Catching by lasso, throwing and tying a calf by the legs.

The bucking chutes where rough stock is released from.

Rowel
Round wheel that is attached to the back of each spur and is blunt for rodeo events.

Riding Hand
The hand a rough stock rider uses to hold on with.

Includes Constitution, and By-Laws and Regulations. Rule changes are made at the AGM.

Saddle
A concave leather seat that fits on a horse's back and is held in place by at least one cinch.

Saddle Blanket
A blanket placed on the horse's back that acts as protection against the saddle.

Riding a horse that bucks, using a saddle.

Season
The NZRCA season runs from March 1st to the last day in February.

Scratch
To withdraw from an event, or an entire rodeo.

Spinner
A bucking bull or horse that bucks or turns in circles.

Spur
Attached to the heal of a cowboy boot, a metal instrument used for the purpose of getting a hold under the animal or encouraging a horse to move faster or in a certain direction.
Spurs are blunt for rodeo events.

Castrated male bovine over a year of age.

Stirrup
A footrest in the form of a ring that hangs by a leather strap on each side of the saddle.

Slack
Slacks are rodeos version of heats. Where a predetermined number of contestants compete in an event before the advertised start time. Used when there is a large number of entries in an event, common in timed events.

A steer roping event that involves two horse riders where one acts as a header (the person who ropes the horns or head) and the other as a heeler (who rides in and ropes the steer around the back legs), in order to bring the steer to a standstill between the two riders.

The end of the arena that the timed event stock and ridden horses start from. The cattle are released from a chute. Ridden horses leave from two boxes.

Touch Down
When a rough stock rider touches himself or the animal with his free arm during his ride.
He is then disqualified. Also known as slapping the animal.

There shall be a minimum of two trustees whose role is to meet the requirements of the Rule 20 (Investments) and to provide the Board with advice on financial matters including any audit or review of accounts provided by the rules.

Facility behind exhaust chute where animals can be contained while any equipment can be removed safely.

Vest
(Protection)
Made of Kevlar, the same material used in bullet-proof vests, & usually covered by leather. Designed to protect the rider's upper body from the impact of getting stomped on or kicked.